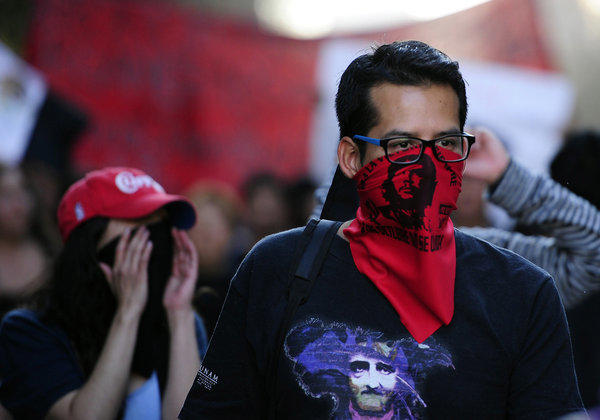 uestions are dogging police this week after nearly 100 people were detained and at least 100 others injured — two seriously — during hours of raucous demonstrations in central Mexico City as Enrique Peña Nieto was sworn in as president of Mexico.In scenes captured on video or transmitted live via Internet streams, demonstrators with their faces covered clashed Saturday with federal police officers outside the San Lazaro legislative chamber as Peña Nieto took the presidential oath of office. Later, more clashes erupted around the Palace of Fine Arts downtown between demonstrators and local police.From there, masked “anarchists” rampaged through the central city, vandalizing hotels, restaurants and banks. The attacks caused more than $1.7 million in damage, authorities said.“This was an attack on the city,” Mayor Marcelo Ebrard said of the protesters who damaged businesses. “They had nothing to do with the day’s events.”via Police actions questioned after Mexican inauguration protests – latimes.com.