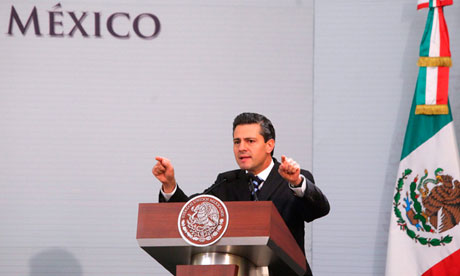 Mexico’s new administration has offered the first details of its new strategy in the country’s war on drugs, saying the government will spend $9.2bn (£5.9bn) this year on social programmes to keep young people from joining criminal organisations in the 251 most violent towns and neighbourhoods across the country.The government will flood those areas with spending on programmes ranging from road building to increasing school hours, President Enrique Peña Nieto and Miguel Ángel Osorio Chong, the interior secretary, told an audience in the central state of Aguascalientes.via Mexico unveils new strategy in war on drugs and for preventing crime | World news | guardian.co.uk.

Did a Mexican political party have agreements with organized crime? – CNN.com