Mexico’s economic growth will quicken as the government increases spending in the second half of the year, Finance Minister Luis Videgaray said.

The economy grew at the slowest pace in more than three years in the first quarter after spending was contained as a new government took over in December, Videgaray said in an interview in London. President Enrique Pena Nieto took office on Dec. 1.Investor confidence in Mexico has waned after the economy expanded less than analysts expected in the first quarter and government plans to overhaul the state-controlled oil industry were held up. Capital flows also have weakened after the U.S. Federal Reserve indicated it may scale back asset purchases as economic growth strengthens.“We expect much more accelerated spending in the second semester,” Videgaray said. “The budget is there and the revenue is there.”via Videgaray Says Mexico’s Growth to Quicken as Spending Increases – Bloomberg. 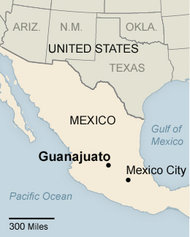 In Middle of Mexico, a Middle Class Rises – NYTimes.com