The Mexico-Canada Guest-Worker Program: A Model For The U.S.? : NPR 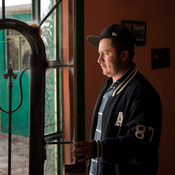 In the U.S., farmers and farm workers alike say the current system to import temporary workers, especially in agriculture, is slow and fraught with abuses.But the shape of a new guest-worker program is still being hashed out. Some say the U.S. should import temporary workers the same way Canada does. For nearly four decades, the governments of Canada and Mexico have cooperated to fill agriculture jobs that Canadian citizens won’t do, and that Mexicans are clamoring to get.On a recent day, the line outside the state labor office in downtown Puebla, Mexico, is long. About 15 men, many of whom have traveled several hours from rural towns to get here, listen for their names to be called.Juan Carlos Corona is called into the office. A state worker enters his name and file number into the computer. She prints out his latest application, staples photos of Corona to his file, and tells him to come back in two months for a medical exam.via The Mexico-Canada Guest-Worker Program: A Model For The U.S.? : NPR.

Guest Workers Are at Crux of Groups’ Deal on Immigration – NYTimes.com